Kerfoot was recently featured in ‘Connected Magazine’ issue 42 for their delivery of a lighting control solution the National Maritime Museum.

With a roofline evoking waves and sails, Australia’s National Maritime Museum at Darling Harbour, NSW, is one of the state’s leading tourism attractions.

The museum houses exhibitions that explore Australia’s links with the sea, and showcases how maritime activities and issues have shaped the lives of people in Australia.

“The museum had an existing Clipsal C-Bus system in place, so it made sense to continue
with the same backward compatible C-Bus technology in this new area,” Kris McMillan,
Estimator at Kerfoot said.

ERCO LED track lighting has been installed in the area, and a C-Bus lighting control
dimming system has been configured for this new space.

“Management at the museum wanted some simple programming of the lights done so
that they could easily dim the lights up and down depending on the display,” Kris said.

“As the fittings are frequently moved around to accommodate new exhibitions in the area,
it would have been a difficult task to set scene control that would suit all displays.”

Eight lighting zones have been established, each with on/off and dimming options. These 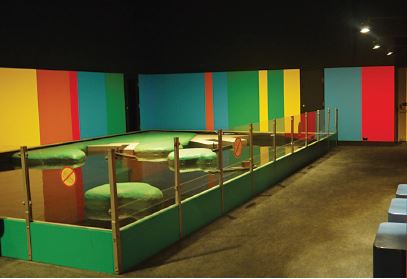 settings can be controlled via one of the two Clipsal C-Bus touch screens at the site. The
touch screens have also been customised to include the National Maritime Museum’s logo
and each has an access code to restrict use to employees only.

The C-Bus system installed allows for future changes and expansion to suit the Museum’s
requirements.

This was the first major project that Kerfoot Electrics had completed at the National Maritime Museum, having previously done some communication work for them.

Stage two of the works will soon be underway and Kerfoot is also hoping to win this part of the project.